They come from all walks of life, there are medical therapists, there are computer scientists, landscapers, physiotherapists, and many other professions, and of all ages too. This year the weekend course is almost only composed of women. Why are there almost always more women than men? Women are very often physically intuitive, they want to feel things, for example the notion of energy circulating, however men often want to understand first intellectually how energy flows.

In Eastern phylosophy, there are very ancient ways of seeing how energy flows through the yin and yang strokes, present in the I-Ching, the book of transformations. In the fire trigram yang trait, the yang energy is concentrated on the surface, so much so that in the yin trigram, yin energy is concentrated in the interior. In the same way, the sex of the man is visible outside whereas the sex of the woman is hidden in the interior. Men often need to understand clearly very concrete things, whereas women can understand then internally. Of course, one can not generalize either in black and white, the human being is much more complex in defining their characteristics. But sometimes there are some features that can be emphasized. 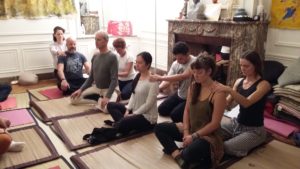 First-year is very important because when you first learn, you feel very strongly, it makes a big impact, but very often, like love at first sight, you lose that feeling over time, then we do not listen directly with our whole body, but our brain starts to work, yes but why, etc… In Zen Buddhism, there is the phrase that says “you must always look at the beginner’s mind”. It’s very easy to just pronounce this sentence, but it’s so true that by looking at the beginner’s mind always, one captures the essence of things. 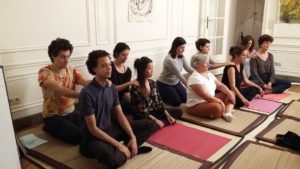 The founder of the Soto sect of Zen Buddhism, Dogen, went to China to learn Zen Buddhism when he was young. When he trained in Japan after receiving the test of his enlightenment, in Japanese Satori, Dogen told his disciples that what he had learned was simply Satori. The people there in China had the nose vertically positioned and the eyes horizontally located. For those who know the truth this phrase, do not consider what Dogen uttered banal at all. 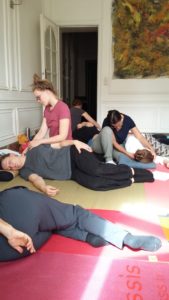 Verticality is related to the notion of heaven and horizontality is the notion of the earth. Everything is between heaven and earth no matter where we are. Wherever we are we are the same inside everywhere. So the answer of what one seeks does not exist elsewhere, it is inside oneself. But to find the inside of oneself one must first see how the others have tried to obtain the deep meaning of this message. The others are mirrors in front of themselves. In shiatsu we always work with partners who are like the mirror of oneself.